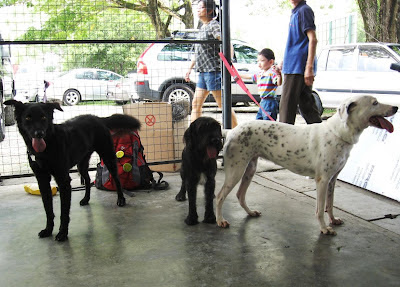 ~ 3 mutt representing team from KL. Scruffy, Ginger and me ~

The day started off with the Obedience trial, and by the time I reached the venue, Intermediate class had already begun. This was Scruffy's Intermediate class debut and he nearly nail it with the score of 163, only missing out the retrieve over jump exercise. While Ginger did us proud by beating off Steven Tan's and Max Lee's Golden Retrievers to claim the Obedience Novice Champion award, while Scruffy settled for 3rd place. 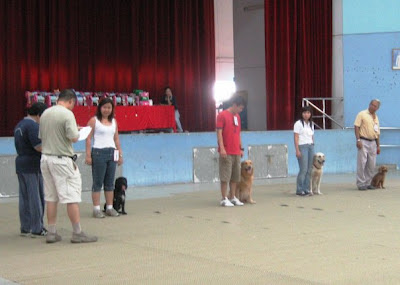 ~ Scruffy competiting along with the OB big guns ~ 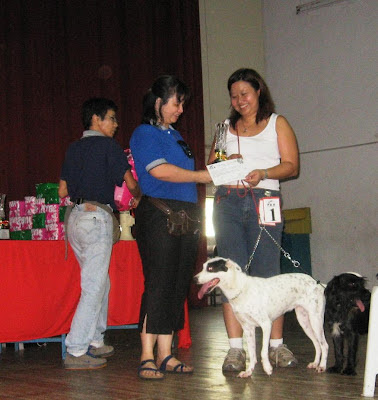 I had a long day before my run began at 3.00pm. Since no warm up jumps are available, I did some heeling practise and playing rough with my stinky tug. This time the treat was Ms Janice's famous "buttered-chicken-liver"! Anything that isn't commercial works great for me. Slurp. 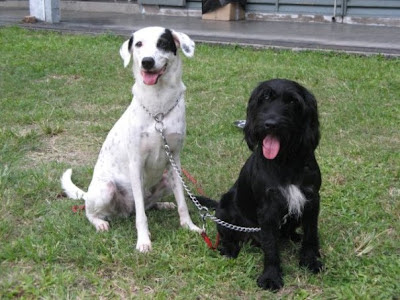 ~ The Fanstastic Duo are set to dominate the OB ring ~

The number of participants was low and some of the registered ones didn't turn up. Groovy's lady boss messaged me some words of encouragement and it really boost up my confidence until it nearly spilled, coupled with our request to Bank's owner, asking him to pray for us that we will win in all 3 class. But the 'blur' him, didn't even realize I was up in Penang, when the rest of the world knows about it.

We started off with the jumper class. It was a totally right handler course if only you want to have a beautiful run. But we choose to go ugly and keep switching side. 1st attempt - off course. 2nd attempt - CLEAN RUN, but I did some wide turning, hence record time 23 second. 1st placing for me.

Qualifying for the Elementary class was our main aim for this trial, although I expect to miss the contact for dog walk. Table wouldn't be much of a problem, since we had been practising table everyday and night for the past 2 weeks, working on every direction and distance. But this time, it was the teeter! 1st attempt: Standing in the middle of the teeter without tilting it down. Ms Owner made me repeat the teeter several times, but I still bailed off without tilting it. 2nd attempt: Still the same. What a bummer and she was got real pissed off. We were in such high confidence that we will definately get it this time. Argg!! Ms Owner feels like throwing me down the Penang bridge and let me swim back to KL. 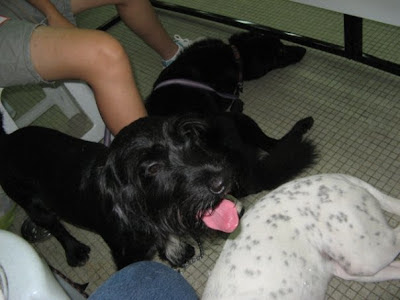 ~ Getting some decent rest in between runs ~

Final run, the Gambler Test I. The gambler sequence was hurdle, hurdle, tyre, hurdle, table. The distance was comfortable for us, but later we notice it had a difficult entry. During the opening sequence, we choose to weave, but I weaved like an old grandma and then I refuse to enter the tunnel. I doesn't seems like my usual self, I never hesitate to enter the open tunnel. But atleast I successfully touch the table this time with Ms Owner giving only 1 cue. Daily practise had made me a table pawfect. Surpringly, 1st placing. 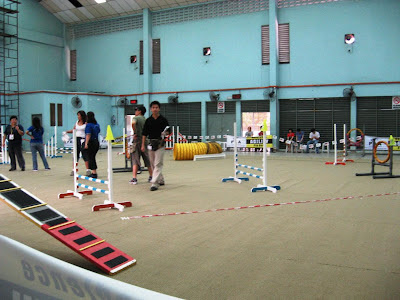 At 7.00pm there was Flyball Mock run. The aim of this mock run was to enable the judge and steward to try out their rules and made any adjustment if necessary. I don't even bring my flyball box along, hence I'm just doing some retrieving work here. The banner was set up in between 2 lanes to ensure the green dogs don't run into each other. Ms Owner predict I will run like an auntie and skip the jumps during the run back. But the outcome was better than expected. During my first 2 runs, Kofi came over to my lane to say 'hi' and ask if he could try out my tennis ball. I got rather paranoid and drop my own ball, but I manage to control myself from snapping innocent dog, and return to Ms Owner. Later, the authority secure the banner from all gaps. Despite all the tiredness, I'm still hitting 7 seconds. Whoopee! But Ms Owner wonder how come I'm not faster at the training ground. 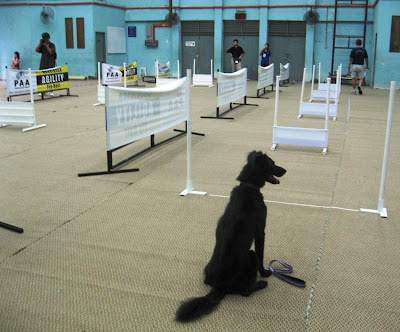 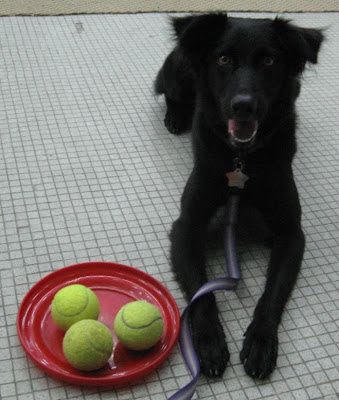 By the end of the day, I did not contribute anything to earn points toward the agility title. Nonetheless, the food prizes were bigger than before. We got 7.5kg bag for 1st placing. Archer's owner got pretty anxious and ring me up demanding for results. She's really happy that I didn't let Pet-n-You down, as this time I came as a sole ranger. Ginger's trophy was really beautiful and yet again I'm so tempted to participate in the OB trial. Scruffy came in 2nd for Jumper class and 3rd in Novice obedience, thus he only manage to bag home the food prizes. 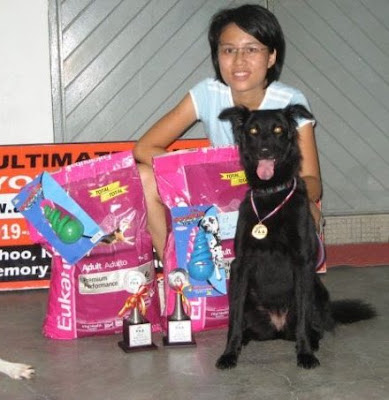 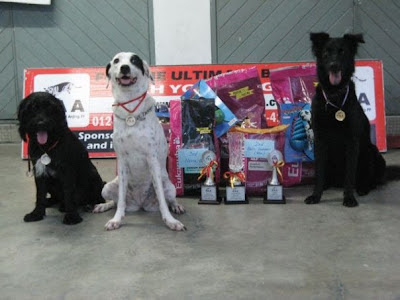 ~ The mafia gang's haul. We, the proudest mutts in town ~
Posted by Urban Smoothie Read at 12:12 AM

CONGRATULATIONS TO YOU THREE!!!
Well well, you certainly didn't let your owner down!

Well done to all of you - great new on your first place too Pacco.

Woooow! Congratulations to you three! You mutts sure made all the other mutts all over the world proud. Who say mutts can't do well too? Good job!!! You've beaten the Pedigrees! Oh, Scruffy 1st time in Intermediate. Hey, he did well. Way way much better than me, definitely & Ginger, wonderful for being the Novice Champ! And Pacco, you & your owner look really happy for winning something too. So, how many people actually turned up? I see the same people in the pictures...

Wow! Congratulations to all of you! You're our heros!

Great recap :) Seems like you are improving a lot and becomming more reliable in trials. Way to go! I'm sure your next trial will be even bigger success.

Our mom is astounded at all the work you all put into this and the dedication - it really does work - mind you - you are all so talented too. Kudos to your human family for the time and effort!

Great work, Pacco! Those are very nice trophies, toys and food! You are so cute that you should win all the competitions whether you do them right or not!

The three of you make all of us mutts proud. We are so happy to be able to share your accomplishments with you.

Look at all dem goodies! Dang girl you are a champeeeon!!

congrats, your lady must never have to buy you food!!

Congrats on your winning!!

Woh you doggies sure won lots of prizes and medals. :)

You really cleaned up Pacco! Way to go.

did you also win the cutest four legged human award?

Wow! Congratulations to you, Pacco, and your pals! You all did grrrrEAT!

You can't go past food prizes Pacco, well done all of you!!!!

The only agility that I can do is jumping on the couch for a nap!
your pal,
toffee

Congrats. You doggies cleaned up!

Woop peee Pacco, you're a star boy. you won. You look very handsome too with the gold medallion on your hairy chest!!!

Nice job! Sounds like you are just getting better and better, way to go! You get nice prizes too.

From
Flash (the mutt) 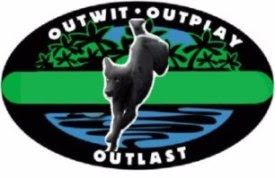